Architecture Competition was a RERUN! 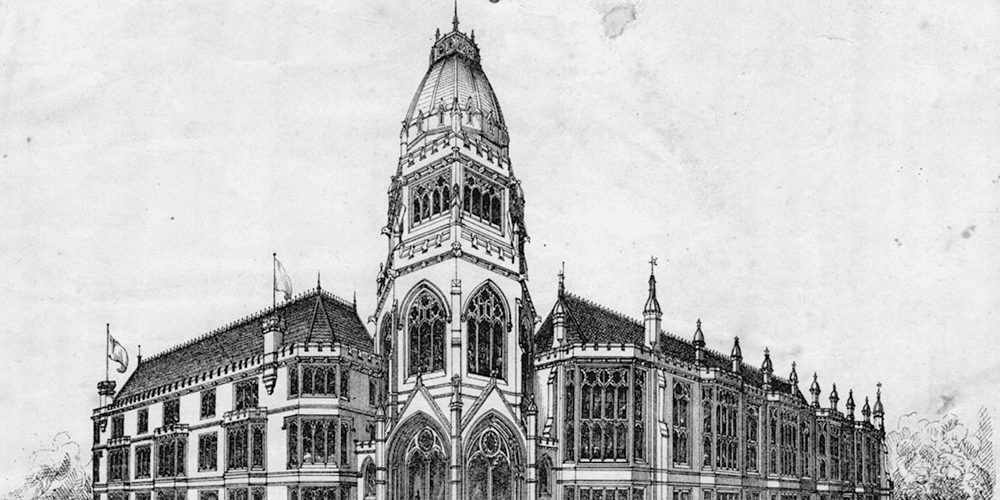 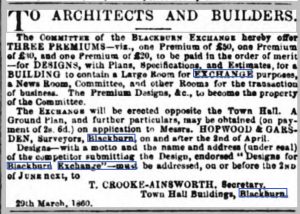 On the 31 March 1860 the Blackburn Times carried an advertisement and editorial article promoting a competition for architects and builders to submit designs for the building of The Exchange. The winning design by Brakespear of Manchester was commissioned and the northern range and octagonal tower was built between 1863 and 1865. The southern range was not completed. H. Brakespear was primarily an ecclesiastical architect but was known for branching out from churches to design industrial and commercial structures in a Gothic style.

However, what many people may not know is that the competition was a re-run of a competition held 14 years previously, when the original location for the project was not opposite the town hall on King William Street at all. Scouring earlier editions of local papers, it appears that project and the competition had been originally launched in February 1846 with a specification for a building much closer to the railway station.

The proposed site was where the original Exchange cloth hall and centre of trading was in Fleming Square, facing the Market Place. Plans suggested the adjacent New Bull Inn were incorporated into the design, with an apartment for the manager.

Here’s the competition advertised in 1846!

The cash prizes offered were the same. 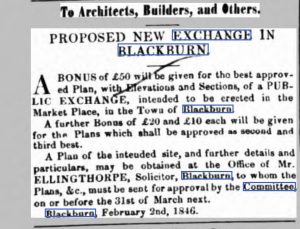 The newspaper article of 31 March 1860 speculates on the decision to move the building project, the effect on property prices and the need for expedience by The Exchange Committee to get on with the task and generate support!

Here’s a transcript from the British Newspaper Archives:

The project for erecting an Exchange in Blackburn is gaining increasing favour with the manufacturers and tradesmen of the town; and, not only is site definitely fixed upon, by the Committee, but plans and specifications are advertised for in our columns of to-day. It was natural that a difference of opinion should exist respecting the most central and suitable spot for the erection of the contemplated building, and are not at all surprised to hear that certain parties have exerted their utmost influence to locate it near to the Town Hall as possible.

That other eligible sites might have been found, if sought for, no one is prepared to dispute; but we question whether all things considered—a more convenient place could have been chosen. Your Manchester man, after hour and quarter’s ride, smoke, chat, or nap, is not at all disinclined to a five minutes’ walk from the station to his commercial sanctuary, the ‘Change; and, as the alteration from the Bull” to the Hall has not offended him, we may safely presume that the proposed site will meet with no serious opposition from your subscribers or shareholders from Cottonopolis. Our local Dons are also beginning to locate themselves near our incomparable Park; and, in a few years, the test of respectability will be, Do you live in the Preston New Road?” and not, as at present, “Is your mansion in Richmond Terrace?” For utility, and for the public convenience, the situation is unobjectionable, as we doubt whether any other available spot would have answered so well when the question of dividends is taken into consideration.

We frankly admit that claims of the localities ought not to be dismissed with contempt, or set aside by supercilious local diplomacy. We have too much of one-sided reciprocity in Blackburn already, to desire to see its sphere of operation extended. ln this case, however, the Committee, in their selection, have consulted chiefly, if not entirely, the public interests ; and, if any advantage is likely to accrue to any favored individuals, or if any adjacent property may possibly be increased in value, if the contemplated plan be carried out, such results are incidental; and the increased value of dwelling-houses and shops in the immediate neighborhood will prove to more imaginary than real, as the ground is already well covered, and the thorough fare cannot be enlarged or improved.

One-third of the capital necessary to the erection of a splendid and capacious structure has been already subscribed and now that the plans have been matured, and premiums for designs offered, we advise the Committee to prosecute an active canvass, and then they will secure all the support which the project undoubtedly merits.