Laying the Foundation Stone – A Day to Remember 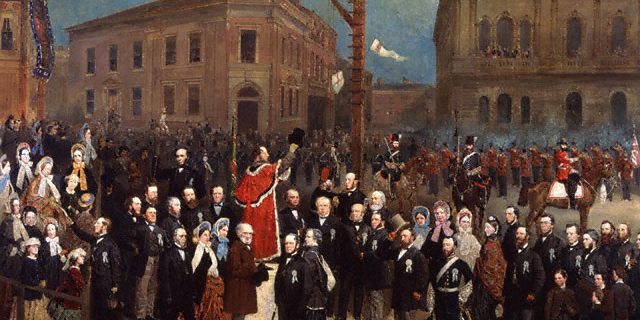 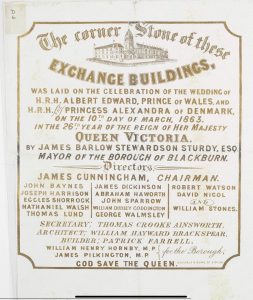 Almost two and a half years after the designs for the Exchange had been chosen, the foundation stone for the Blackburn Exchange building was finally laid. The day chosen, Tuesday the 10th of March, 1863, coincided with a general holiday for the celebration of the wedding of Prince Albert Edward, the Prince of Wales, and Princess Alexandra of Denmark. Blackburn’s Royal wedding celebrations had first been designed to be of a modest affair, more befitting, it was thought, the distressed condition that the inhabitants of Blackburn were suffering than a lavish and profuse expenditure in mere display. But as Blackburn was ever renowned for loyalty, it was impossible that the celebration movement, once initiated, would stop short of something worthy of the occasion. Following presentations of the rifle volunteers’ colours in front of the Town Hall in the morning, a procession marshalled in the large open space between the Town Hall and the Market House. From there, the route of the procession was through Frances Street (later to be re-named Library Street), Richmond Terrace and Preston New Road to the Corporation Park where two Royal Oak trees were planted, one for each of the Royal couple. From the Park, the procession returned to the Market Place by way of the West Park Road, Branch Road, King Street, Back Lane, Darwen Street, Church Street and Victoria Street and the site of the new Exchange building was reached at about twelve thirty. The site was profusely decorated with flags and banners but what formed the chief beauty of the scene, it was claimed, was the spacious ladies’ platform, crowded from base to summit with the elite of the town and neighbourhood. In the unavoidable absence of the architect, William Breakspear, the plans were presented for inspection to the Mayor, James Barlow Stewardson Sturdy, by Mr Brierley, the borough surveyor. Pronounced correct, the inspection was then followed by the placing of a time-capsule bottle in a specially prepared cavity under the stone. The bottle contained coins of the realm, local newspapers, and other documents and the hope was expressed that it might there remain a thousand years and more. This was then followed by the laying of the foundation corner stone as the immense block was lowered into its place. The day ended with a firework display in the Corporation Park and a bonfire on the heights of Revidge, commencing around eight o’clock.

Not everyone was overly impressed by the civic efforts; in a letter to the editor of the Blackburn Times, “Uncle Jonathan” observed, in satirical manner, that the celebrations had been rather weak and the public less than enthusiastic. Another correspondent had previously commented on the ceremony being performed by Mayor Sturdy, observing that it had always been understood that the former Mayor, James Cunningham, would perform the stone laying ceremony but “by a little scheming the worthy alderman is put on one side, and the new Mayor and new shareholder is to do the honours of the day”.

The directors of the Exchange Company, including Joseph Feilden, Esq, the Lord of the Manor, were then entertained to tea by the incumbent Mayor at his residence, West Bank, on the 11th and 12th of March.

In order to create a record of the laying of the Exchange foundation stone the Russian artist Vladimir Sherwood, who had been for some time in Blackburn, had arranged to paint a memorial picture of the scene. He was already working on a preliminary sketch and the point of view he had chosen was from the scaffolding erected over the back wall. This gave him the foundation stone in the foreground with the group surrounding it, on the left was the ladies’ platform and in the background was the Town Hall with the volunteers in the space in front. It was felt that the chief value of the picture would be as a memorial consisting of the portraits of the local dignitaries who had taken part in the proceedings. Several of the gentlemen who were present had already arranged to give sittings for their portraits and all others who had taken part, and who desired to be correctly represented in the positions they occupied during the ceremony, were advised to waste no time in communicating with Mr Sherwood as the number of portraits that could be included in the painting was limited. It was believed that the painting should become the property of the Exchange Company and would be suspended in the large room of the new building. Vladimir Sherwood’s artistic prowess was not restricted to Blackburn, on the 29th of April it was reported that he had “had his two paintings” accepted by the hanging committee of the Royal Academy. It was not reported which two paintings these were.

A description the artist’s work in progress appeared on page two of the Blackburn Standard of the 13th of July 1864. The reporter had visited Mr Sherwood and commented on the scope of the painting. He also identified most of the dignitaries portrayed, but added that a good deal of the foreground yet remained to be filled up, and there were still only pencil outlines of the volunteers and their officers. Mr Sherwood’s painting had been completed by the end of October 1864 and was on display at Mr D Johnson’s Gallery of Arts on Corporation Street. Curiously, in the 29th of October edition of the Blackburn Times, a report on the painting claimed that the “laying of the foundation stone” was “…the subject Mr Marsden, a clever artist, has chosen;” It is presently not known who Mr Marsden was or what connection he had with the painting. The report also identified several of the subjects in the illustration though it was noted that some license had been allowed for as it was known that both Mr Pilkington and Mr Hornby, present in the painting, had not been present at the laying of the stone. It would later be claimed that the painting had been subscribed for by gentleman of the town who had been anxious to have their faces portrayed and that they subscribed £10 for each face.