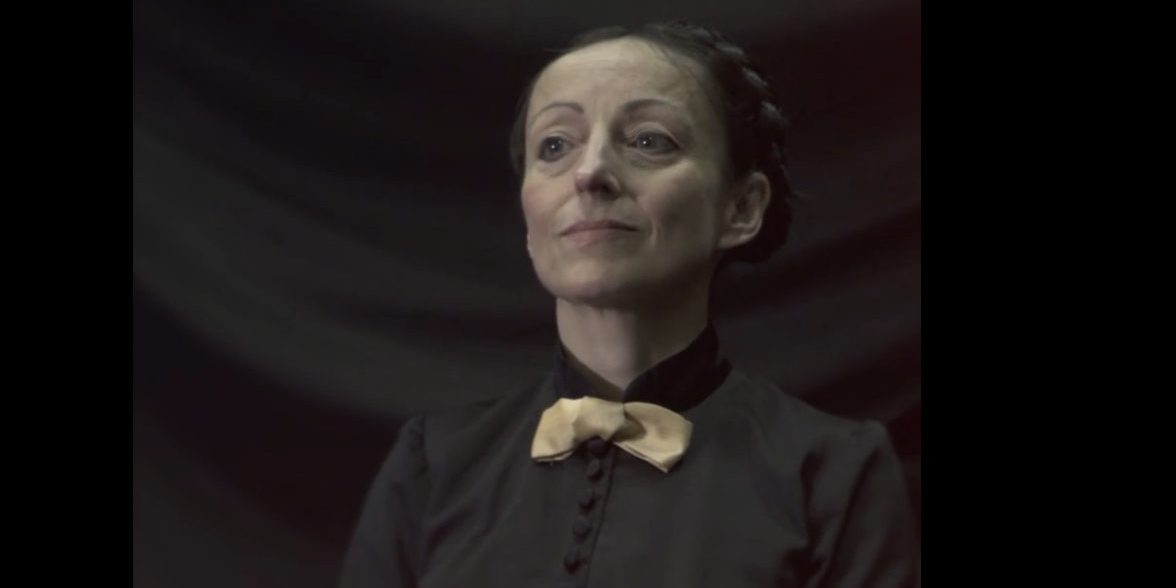 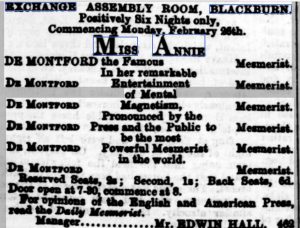 February 26th 1877 for six nights only, Miss Annie De Montford appeared at The Exchange, pronounced by the press and public of the time as ‘the greatest mesmerist in the world’. 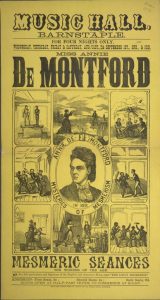 According to researcher, writer and performer, Christopher Green ‘she was also called a ‘psychological star’ and an ‘electro-biologist’, and occasionally a hypnotist. Her bill matter claimed that her ‘mind governs the world’ and she is the ‘wonder of the age’. Detailed reviews and descriptions of her touring performances are similar to the sort of stage hypnotist entertainment presented by modern day showbiz hypnotists like Paul McKenna.

“Miss Annie De Montford, one of the most clever mesmerists we have seen, commenced a short visit to the town on Monday evening, and was patronised by a considerable audience at the Philharmonic Hall. Though by no means the first professor in the art of  mental magnetism ” introduced to a Southampton assembly, Miss de Muntford has certainly eclipsed any of her predecessors in the illustrations she gives of her extraordinary influence over the human will and imagination, and her entertainment is novel, interesting, and mirth-provoking. Out of some twenty-four young men and lads who stepped on the platform, she selected ten as fitting subjects, and impressing them with the most preposterous delusions, obtained such amusement out of their antics as at times fairly convulsed the audience with laughter, and for an hour and a half sustained the interest and merriment.

The chief merit of Miss de Montford’s performances is, we think, the  extent to which, she causes her assistants from the audience to go in playing their imaginative parts. For instance, imbuing them with the martial spirit, she not only causes them to perform soldiers’ drill and do battle for their country, but after several are slain and wounded, the survivors carry off the dead and afford medical aid to the injured in most natural fashion. Another very amusing exhibition is given when, fancying they are a company of acrobats, they accomplish a variety of feats with chairs, which they probably would not even attempt in their state. The entertainment on Monday closed with a most ludicrous scene, for Miss de Moinford defied her company on the platform after taking their coats and, in some instances, waistcoats off to put them on properly again, and when one got his head through the arm holes , his waistcoat and then coolly taking off his boots, proceeded to put his legs in his coat sleeves, it may be guessed how near he was to the accomplishment of his purpose whilst the others got into similar laughable difficulties. The entertainment will be continued with a change of programme each evening.’

According to this blog by Christopher Green on the British Library website an investigation by an American reporter revealed that Miss Annie had been caught using stooges whom she employed, and that certain audience members become obsessed with her and volunteered to be her subjects night after night.

Christopher Green is a performer and writer, co-curator of the British Library free exhibition Victorian Entertainments: There Will Be Fun

There Will Be Fun was an exhibition at the British Library October 2016-March 2017. It focused on 5 performer/promoters to tell the story of 19th Century Popular Entertainment. These were brought to life by a company of performers. Here Joey Robinson brings mesmerist Annie De Montford to life. These films were shot and edited by James Norton, directed by Christopher Green They were shot and formatted for display on portrait monitors, hence the portrait format on YouTube Exhibition curated by Christopher Green and Helen Peden of the British Library.