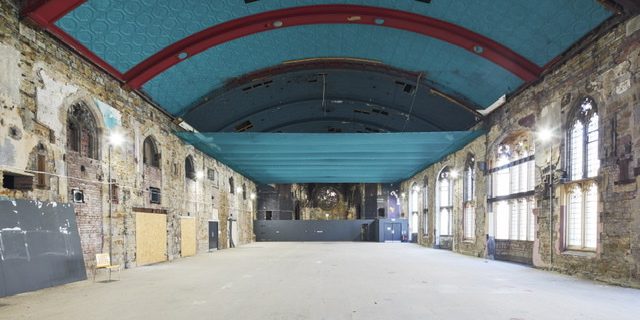 On this day in history, 30 April 1898, news was announced of modernisations and building alterations to the Exchange, Blackburn. These included relocating the stage to create a gallery to increase capacity to 350 people and moving internal pillars to improve the spectators’ view. This would also make better use of new exit doors to help with quickly emptying the building. Also creating anterooms as green room spaces.

“We ventured to forecast a few weeks ago, certain alterations have been on the carpet for the improvement of our Exchange, and on Thursday the Directors (Mr. James Hoyle in the chair) decided to make such alterations in their property as would make it more up-to-date. Briefly, the alterations consist of sweeping away the present stage, and building in its place a gallery capable of holding about 350 people. This gallery will be open underneath, to bring into use the new exit doors made some little time ago, and which are capable of emptying the room in a shorter space of time than all the other exits put together.

The new stage will be built at the King William-Street end, and will communicate by means of a bridge with one of the rooms belonging to the present Assembly Rooms, which will form a retiring or ante-room of ample size.

The present ante-room is hardly large enough to swing the proverbial cat in, so the change will be welcome.

Mr. Edleston will in future be placed in an office in the Reading Room, as his present office is required to form a staircase from the stage to the tower.

Two of the pillars which form such an eyesore from the spectators’ point of view, will be removed, and certain other minor alterations will be made.

Meters. Marshall and Dlnt are the contractors employed, under the superintendence of Mr. James Beetwistle, architect, of Tackett-street.” 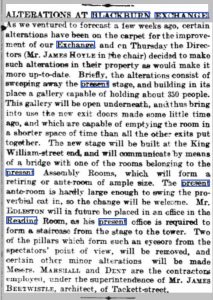