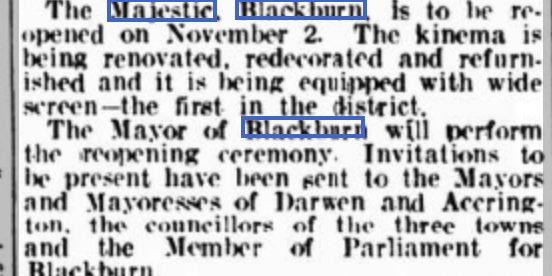 On this day in history, 2 November 1953 the Mayor of Blackburn reopened The Majestic Cinema at The Exchange, Blackburn after extensive refurbishment. Looking ahead to the ceremony, Kinematograph Weekly reported:

The kinema is being renovated, redecorated and refurnished and it is being equipped with wide screen—the first in the district. The Mayor of Blackburn will perform the reopening ceremony. Invitations to be present have been sent to the Mayors and Mayoresses of Darwen and Accrington. councillors of the three towns and the Member of Parliament for Blackburn. The kinema is owned by ‘Majestic ‘Cinema (Blackburn). Ltd., of which Harry and Ray Buxton are directors. The manager is Arthur Jackson.

Loads of great information about the cinemas of Blackburn here: http://www.arthurlloyd.co.uk/BlackburnTheatres.htm#exchange