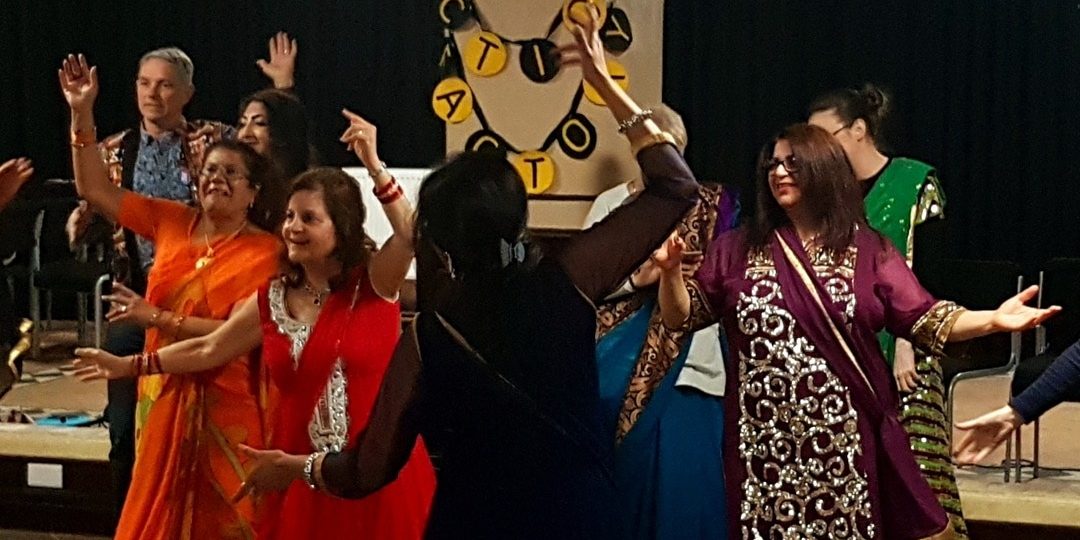 Near Neighbours and Action Factory hosted a celebration of culture, community and entertainment exploring the ideas of wisdom, faith, tradition and industry as part of Interfaith Week.

This included the Weaving and Wisdom Exhibition, a display of woven rugs created by groups of women from different faiths in Bradfords and Pakistan, encouraging women to debate issues relating to life and faith. Inspired by the women who have influenced them and the wisdom passed down from one woman to another, groups of females – from interfaith groups to schools and girls’ brigades – were given the material to produce their own colourful rugs.

Some textiles from the world famous Gawthorpe Textiles collection were also on display alongside the rugs. Pieces were selected to complement those from the Touchstone project in Bradford, with references to cultural, social and personal histories around a theme of place.  All the pieces are woven from wool, linen or cotton, reflecting the industrial heritage of the North West and therefore it was fitting that she should be displayed in the old Cotton Exchange building in Blackburn.

Other activities included a display of Indian dance and Indian Food, a public storytelling session and a day of dance bringing together Hindu dancing, Ceilidh dancing and Morris dancing. Pupils from Roe Lee Primary School demonstrated their clog dancing skills in a special performance. There were also  demonstrations of how to wear saris and headscarves, the chance to decorate beads and have henna painting too.

Near Neighbours brings people together in communities that are religiously and ethically diverse so that they can get to know each other better, build relationships of trust and collaborate. This event also featured as part of Blackburn with Darwen’s ‘Our Community Our Future’ cohesion project.