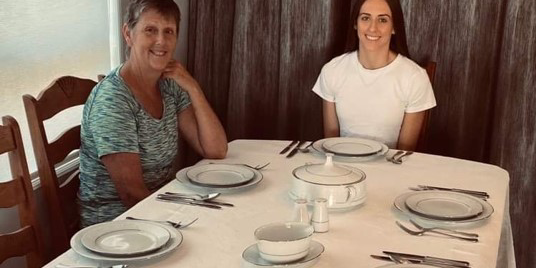 Bill McKeich is looking forward to the forthcoming wedding of his granddaughter, Anna Thomson when a beloved family heirloom from Blackburn will take pride of place, the other side of the world in New Zealand. Bill is lending the happy couple a beautiful embossed cotton tablecloth likely to have been manufactured in the cotton mills of the industrial revolution in the 1800s. This treasured possession has been handed down through generations from Bill’s late wife’s great, great uncle, William Roylance. So what has this got to do with The Exchange?

Bill who lives in Paraparauma in New Zealand has been researching his family’s ancestry for 40 years. He got in touch with our charity to say that he had been led to believe that a distant relative on his wife’s side, a William Roylance was a Superintendent of the Blackburn Cotton Exchange and asked us if we might be able to verify the information.

Bill’s email explained: ‘My mother-in-law Myrtle Ward grew up in Blackburn. She travelled to New Zealand with her mother in 1926 aboard the Leucadia. I believe the table cloth was last used at Myrtle’s wedding to William Bain Swan in 1930 in Wellington. The bride, Anna is four times great niece of William Roylance.’

Although a comprehensive history of The Exchange has yet to be written, our volunteer archivist, Harriet Roberts did some digging around in the British Newspaper Archives and was able to uncover the story of a man, well respected in the local community and across the industrial region. According to the press reports of the time, William Roylance was appointed in June 1863 to the office of ‘Secretaryship of the Town Hall Exchange and Newsroom, beating 43 other candidates who had also applied for the role.

Here’s an extract from the Blackburn Standard, Wednesday 3 June 1868

PRESENTATION TO THE SECRETARY AND SUPERINTENDENT OF THE BLACKBURN EXCHANGE

On Wednesday afternoon, prior to the change hours, an interesting event took place in connection with our local Exchange. For some time past many of the manufacturers, especially from Manchester, having been pleased to notice the uniform urbanity displayed by Mr. Roylance, who has for five years filled the responsible position of superintendent to the Blackburn Exchange Company, limited, determined to make their high sense of his conduct by presenting him with a substantial evidence of their kindly feelings towards him.

A subscription list was opened a short time ago, and the result of the labours of the gentlemen who undertook the task of providing a suitable testimonial for Mr. Roylance were liberally seconded. Shortly before three o’clock on Wednesday afternoon a number of the merchants assembled in the Secretary’s office, for the purpose of formally making the presentation. Amongst others present we noticed Mr. James Boyd, of the firm of Ross, Boyd, and Co., Manchester; Mr. T. H. Arrowsmith, of the firm of Morris and Arrowsmith, of Manchester; Mr. Massey, of the firm of Dilworth and Sons, Manchester; Mr. Ward, Bolton; Mr. G. Grime, Mr. W. Rosser, and others. Mr. Boyd, in making the presentation, said that a short time ago a book was placed in his hands- bearing the following inscription on the first page: “Subscriptions for the purpose of presenting a testimonial to Mr. William Roylance, superintendent of the Blackburn Exchange, in recognition of his uniform kindness assiduity and attention to the duties devolving upon him as superintendent during a period of nearly five years.”

By the hint of a little exertion on the part of himself and others they had raised the very handsome sum of £22, which he begged to present to Mr. Roylance, and in asking him to accept that small token of appreciation he might say that he hoped that he might always have a purse containing a good lining of gold. (Hear, hear.) He had great pleasure in handing the present to Mr. Roylance. The money was enclosed in a morocco purse, which bore on the inside an inscription. Mr. Roylance said that he was exceedingly grateful to them for the handsome present which they had just put into his hands. On referring to the minute of his appointment he found that it was just five years that day — the 27th of May — since he was appointed secretary and superintendent of the Exchange and Newsroom. He begged to return his sincere thanks to the gentlemen who had contributed towards that present, and he hoped that he should continue to prove himself worthy of their kind recognition as evidenced by their handsome present. He hoped that before long though gentlemen of the Blackburn Exchange would have better times, and that increased prosperity would attend their labours. He again thanked them for their kind present. The proceedings then terminated.